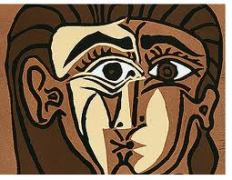 how complete the illusion is,

that beauty is goodness.”

Note: I wrote this yesterday, but for some reason I couldn’t publish it.

I’m having an ugly-day today. One of those days, where I feel picasso-esque. I get those from time to time.

I have a very warped body image of myself. I know that. For instance, I won’t let Phil carry me and I rarely sit on his lap, because I think my weight equals that of a baby-elephant.

I can’t trust mirrors either. Well either that or I can’t trust the people telling me, that what I see in the mirror is not what they see when they look at me. And they don’t mean it in the inner-beauty-shining-through-kind-of-way, either.

When I was younger, I used to get angry at people complimenting me on my looks. I seriously thought they were adding insult to injury.

This might explain, why I only fell for guys, who treated me badly. I really must have thought, I don’t deserve better or at least they are being honest with me or something.

Today, because I’m a bit older and have learned to fit into a realm of social expectation, I don’t shoot people filthy looks anymore when they complement my looks. I graciously accept and smile and say “Thank You” in my sweetest telephone voice (do you have a telephone voice too? Not even sure why and how I started having one, but I sound very Mary Poppin-sy with a cheerful little laugh in my voice. Phil’s Mom can’t stand it!).

Unfortunately, that doesn’t mean that I see what they are seeing.

Most of the time, I just accept that apparently my vision is skewed when it comes to me. And that’s fine. I don’t really think about it too much.

But then, other times, I can’t ignore it. Everything about me feels off. Picassoeque is actually the best term I have to describe the feeling (hunchback of Notre Dame would do equally well, if you prefer that image).

Today is one of those days.

When I walk through town, I get paranoid. I feel like everybody is staring at me. At the freak. It’s horrid. I avoid leaving the house on days like this, if I can.

Today, fortunately, I could since it was a study day.

Usually (and today was no different) I look through old pictures of myself. Retrospectively, I can agree, that I don’t look that way, but I can’t transport that insight into the present (it doesn’t even work, if I take a picture, I tried).

I think it may have something to do with feeling disconnected to the person in the picture. Over time, the woman smiling back at me, banned on celluloide, feel like an old acquaintance. Someone I lost touch with over the years, but not like myself.

It’s during those times, that I think of my american grandmother.

All the dysfunctional crazy that she is deserves several posts of epic lengths, but I am not up to that today.

The reason I mentioned her, is because even though she loves me (and I’m sure she does in her own dark world) she has never been to great at making me feel like I deserved to be loved.

When I started seeing them again, I think I was around five.

One of my earliest memories of my grandmother is telling me I’d better work hard in school and learn how to cook and other house-wify-stuff, because I surely wasn’t going to find a husband based on my looks. I think I must have been around six at that time.

She also constantly told me to cover my, as she put them, “manly” legs ( I think she ment fat and was trying to soften the blow).

When Phil met my family in the U.S. about three years ago, I hadn’t seen them in ten years.

The first thing she did was tell me I had gotten big (in all honesty, I had put on about 10 pounds at that time so I was probably a size 10 at that point).

The second thing she did was ask Phil if he wanted to marry me in the future. He said “Yes, absolutely.” She looked at him surprised (honestly surprised!) and said “Why?”.

There was a short pause while my cousins tried to fade into the background (people do that, when she speaks at times. It’s like an incredibly embarrassing scene in a Movie you can’t watch, so you shrink away from it).

Before Phil could answer, she continued “It’s not because of the family money, is it! She won’t be inheriting anything for a long time!” (I’d have to add that my grandparents are quite wealthy, but you wouldn’t know by looking at my grandmother, most of the times she looks like a bag lady, honestly she does!).

Obviously, Phil denied this looking more and more like a deer caught in the headlights. I had told him about my dysfunctional family, but most people don’t believe me until they’ve seen it with their own eyes.

My grandmother sensed this and bellowed on “You better tell me. I will find out sooner or later. It can’t be her looks. I mean look at you.”

A year later, I visited them again, this time alone. It was after my grandfather’s funeral which I had missed due to the volcano eruption that grounded all air transportation. I needed to see him one last time and say good-bye (I still get choked up writing this. He ment the world to me).

I had dropped the 10 pounds and a couple more.

When she saw me said “You are thinner now. That’s better, but I think there’s nothing we can do about the rest.”

I don’t know why my grandmother thinks I’m ugly.

Weirdly, she always praises my mother for her beauty (which is true: My mother was one of those truly stunning women that only come around every couple of years). The one thing I heard growing up at nauseam was how much I favored my mom. She denies this. “Oh you look only like your father.”, she says (which in itself, wouldn’t be that bad either, since my father is rather presentable, but it’s just not true. So not true, that people used to think I was his girlfriend when we went out together on father-daughter-dates).

I’m not sure, if my grandmother is the catalyst of my own warped view of myself or if she only enforced something that was there from the start.

In the end, it doesn’t matter.

Except on days like these, where I keep hearing her voice in my head over and over again:

“You’d better find other means to find a husband, because it won’t be through your looks” – Seriously, who does that to a child?

19 thoughts on “You’d Better Find Some Other Means To Find A Husband Because It Won’t Be Through Your Looks!”